Day 1.  This hike starts in Etseri, about a 35-min drive from Mestia. The trail is marked red and white, the first part follows a wide dirt road that is used a lot by locals. First you will be passing through a few villages of the Etseri community, then the road starts going up into the alpine meadows where villagers keep their cattle in summer, and over Baki pass (highest point for today, 2460 m). Great views of Ushba, surrounding glaciers,  Dolra valley and the Svaneti Range. After you pass Baki and start descending, you will come across a place called Meziri: an alpine meadow with a small church devoted to the Archangel Michael. Beyond the church there is a small lake, probably the only lake in Svaneti where you can catch a reflection of Ushba. From near the lake you can already see Becho waterfalls in the distance and vil.Mazeri below you. The trail goes down through a forest and finally merges with a wider forest road that descends into Mazeri near Grand Hotel Ushba, straight after the bridge (location “2” on the map below). Distance for the day: 15 km. Elevation change: 950 m. Overnight in Mazeri. The map shows the trail in the opposite order, please don’t be confused. The order we suggest gives you better views of Ushba. 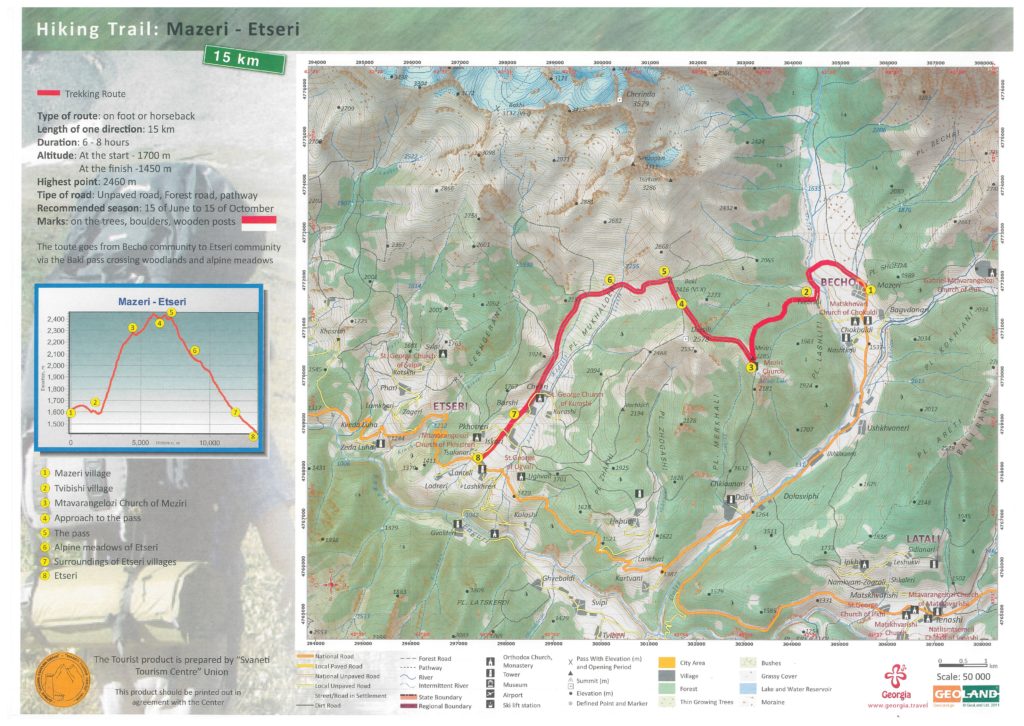 Day 2. The trail to Ushba glacier starts at the wooden bridge across the river Dolra, to the north of Mazeri village, near Grand Hotel Ushba. First it goes along a pleasant dirt road along the Dolra, then near Hiker’s Cafe the road becomes a footpath and goes on through a shady forest with glimpses of the valley and Shdugvra waterfalls on your right. Then the path crosses another wooden bridge and arrives at the border police post. Pass the border police and keep a little left. Follow the path that takes you out of the forest and starts going up and getting more and more steep and rocky. You will need to cross a few streams on your way, and finally the trail arrives at the start of Shdugvra waterfalls and further at the beginning of the glacier (2900 m). The end of the trail is marked by a big boulder monument to alpinists that perished while ascending Ushba. You can go a little further to the river flowing from under the glacier, but we strongly recommend NOT to walk on the actual glacier. Follow the same trail back to Mazeri. Distance for the day: 24 km. Elevation change: 1300 m. Distance for the day: 24 km. Elevation change: 1300 m. Overnight in Mazeri. 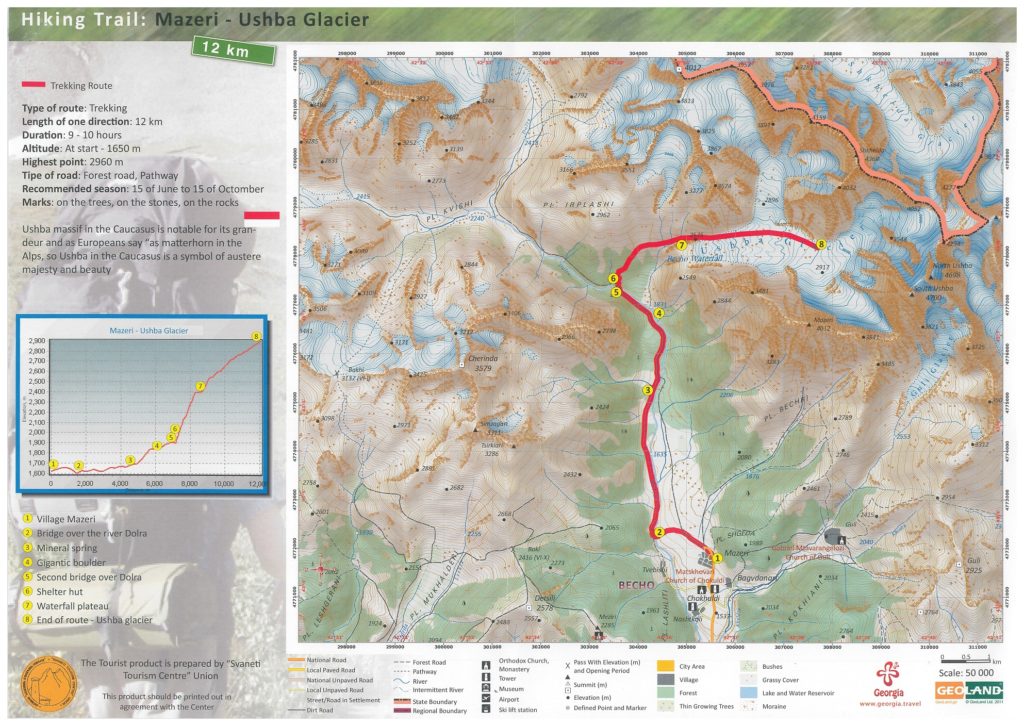 Day 3. The trail starts in Mazeri, follows the Dolra river downstream, crosses the bridge and continues downstream on the other side until Ushkhvanari. Here the trail starts climbing up gradually until it comes to a view-point at 1600 m. In about 2 km you arrive at the highest point for today and the trail turns left. Soon the ruined towers of abandoned village Ipkhi show and the trail goes down into Latali, near St. Jonah’s church (Ienashi). Distance for the day: 9.5 km. Elevation change: 300 m. Overnight in Latali. 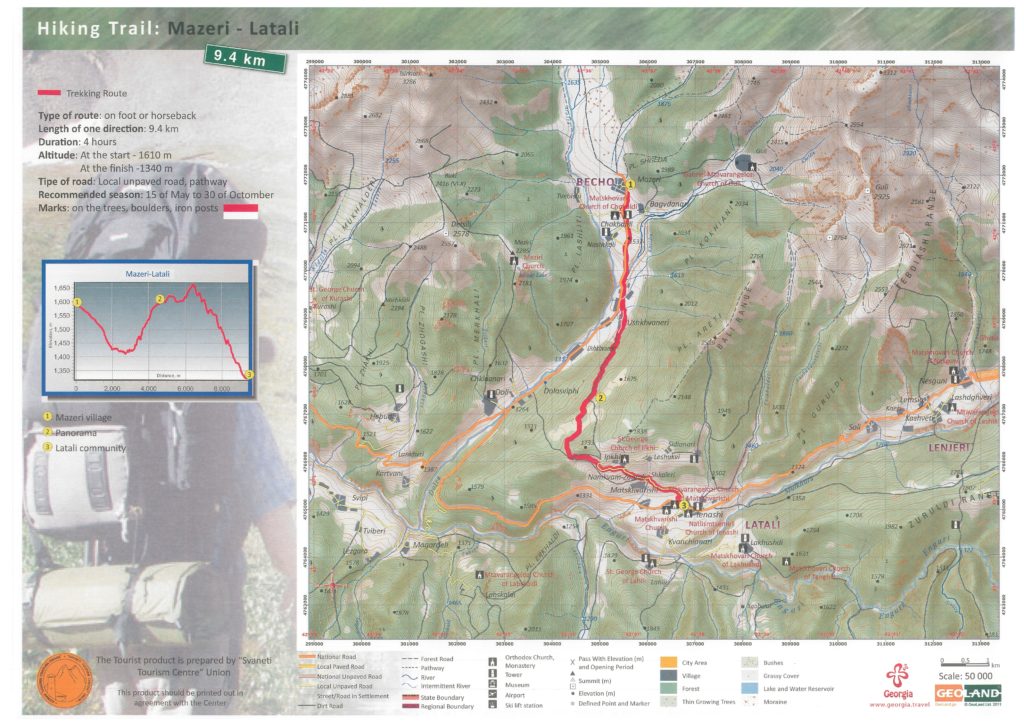 Day 4. The trail starts in central Latali, near Archangel’s church, marked red and white. Follow the main dirt road down to the river (Enguri), cross the bridge and turn right. After you pass some ruins at Lahili, the trail turns left and goes up more or less straight, following a shady forest road that the locals use a lot on horseback. It’s a steady uphill ascent in a pleasant mixed forest. Finally the path reaches the alpine zone and you will see Archangel’s church of Mkheri to the right of the trail (2500 m) and some shepherds’ huts on your left. The church building is new, restored by archaeologists in the 1990’s from the ruins of an ancient monastery that had been buried by an avalanche in the Middle Ages. From the church there is a splendid view into Lailachala valley and the waterfalls formed from a glacier that melted away some 50 years ago. If you are lucky with the weather, you should enjoy a view of a large section of the Great Caucasus and a big part of Upper Svaneti. The driver will pick you up in Latali. Distance for the day: 14 km. Elevation change: 1200 m.

There are no technically difficult parts on this trail, but the elevation changes are significant, so you really need to be in good physical shape to enjoy it.